Station XIV : Jesus is laid in the tomb

57 When it was evening, there came a rich man from Arimathea, named Joseph, who was also a disciple of Jesus. 58He went to Pilate and asked for the body of Jesus; then Pilate ordered it to be given to him. 59So Joseph took the body and wrapped it in a clean linen cloth 60and laid it in his own new tomb, which he had hewn in the rock. He then rolled a great stone to the door of the tomb and went away. 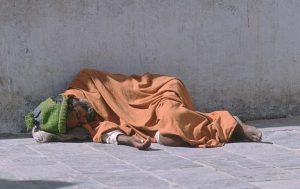 Abandoned by the apostles, the dead Jesus is buried by a disciple.  According to Jewish ritual, he is placed in a (ritually) clean shroud.

Having completed the burial, Joseph leaves, but verse 61 reports that “61Mary Magdalene and the other Mary were there, sitting opposite the tomb”.  Through the addition of this verse, Matthew reflects both the fact that there were witnesses and the expectation of resurrection.

Genesis shows us that human beings are created by matter but inspired and brought into existence by the very breath of God.  So we are our bodies and we are our souls. And there’s something important and beautiful about that.

If that’s right, then every moment that we have together is in a real sense, a holy moment. Every encounter we have with one another is an encounter that is inspired by the spirit of God. So, animated by the breath of God, human beings are seen to be holy creatures, living among other holy creatures in a world that is holy. That means that your body is holy. Your very bodyliness is sustained by God. Every-body is holy.

O Lord, you search me and you know me.  For it was you who knit me together in my mother’s womb.  I praise you for I am wonderfully made.  Wonderful are all your works. (Prayer is based on Psalm 139)

Father Chris Riley founded ‘Youth Off The Streets’ to give practical help to young people whose future seemed bleak.  Read some of the stories on the website and reflect on how you can support others.